In the Dalam Jelantik temple, people mainly pray for health since the place has shown itself to be a blessed place. The painting was created out of gratitude. 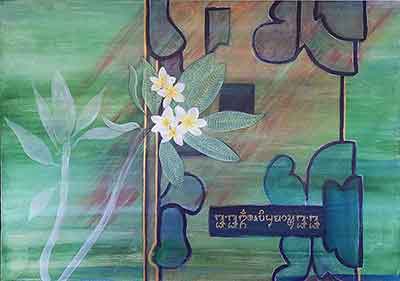 In the Dalam Jelantik temple, people mainly pray for health since the place has shown itself to be a blessed place. The painting was created out of gratitude.

History of the temple

Two stones have made the significance of the place known through their magical appearance. The parents (or grandparents) of the priest in charge of the temple had tilled the land for the landlord, the noble family Jelantik. While ploughing, two large stones lay in the field. These were taken to the edge of the field and placed under a palm tree so that the land could be ploughed. The next day, the stones were again in the same place, in the middle of the field. This happened repeatedly.

The repeated magical appearance of the stones at the original site was the sign that this was a special place. Therefore the Balinese erected a shrine with the stones at the site. At the shrine, petitions for health were heard. Plants used to make traditional Balinese medicine began to grow there.

In the course of time, the shrine was expanded into a small temple. Thanks to donations, a basin for spiritual purification in holy water was added.

The healing stones in the temple

The stones are kept in a raised stone building with a staircase, flanked by stone nagas. The resident priest, who is already elderly, reports that the stones have gained weight and size over time.

The temple building for the stones, Kamar Suci, has a façade decorated in semi-relief, which can be seen in my painting.

Two larger-than-life figures, one female and one male, are also housed in Pura Dalam Jelantik. They are called Ratu Agung. During the time of Galungan, divine spirits animate the figures and bless the place and the people who ask for it. In the time of Galungan, the ensouled figures can be invited to private homes. They are then carried in a procession to the house of the person inviting them. The procession carrying the divine figures to the inviting house consists of a group of men from the village.

I have encountered this group with the figures several times. The men all look very serious, while the priest at the end of the procession smiles. It was explained to me that the men pick up the somewhat grim spirit of the celestial beings in the figures.

Praying in the Dalam Jelantik temple

The visiting day for Pura Dalam Jelantik is “Buda Umanis”. This is a special Wednesday in the Balinese calendar, celebrated every four weeks. On this Wednesday, people from Bona village but also from far away come to pray at the temple.

In Covid times, I don’t visit temples and I don’t go to the temple with friends on the day of “Buda Umanis”. But that will change again.

Several times I have asked the priest of the Dalam Jelantik temple in acute situations to pray for the health of friends in a small private ceremony. The help from the temple was rarely long in coming.

My painting was created out of a feeling of gratitude.

The painting of the Dalam Jelantik temple in Bona. By tapping or mouse-over, the temple building becomes visible.

Order for a fee 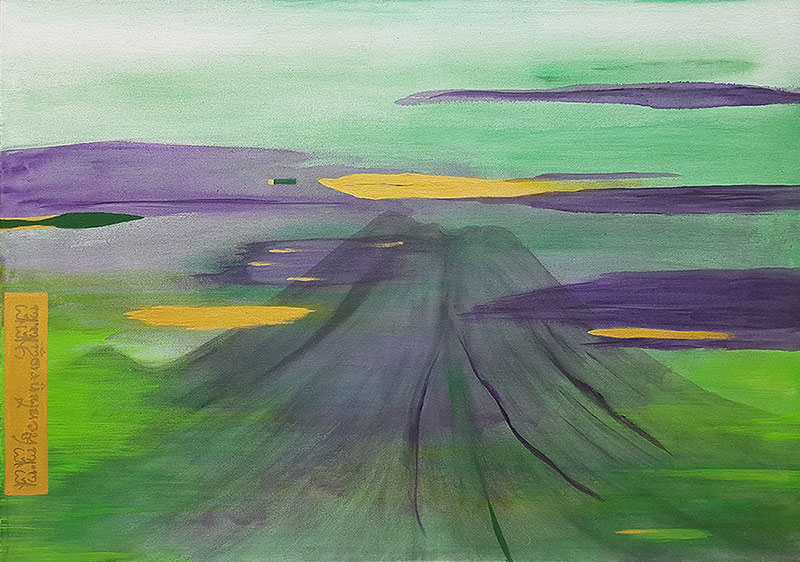